Have you ever met an author online and had an instant connection because he is hilarious, brilliant, and extremely generous with his praise for other authors? I have and his name is Jarrett Lerner. This amazing guy recently released his book, ENGINERDS. Mysterious boxes, creative kids, and farting robots will make you laugh hard enough to snort, as you turn page after quick-paced page. We were thrilled when Jarrett agreed to answer some questions for our blog. Read on to find out more about his process. You may even snatch up some free writing advice! 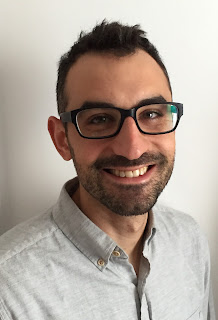 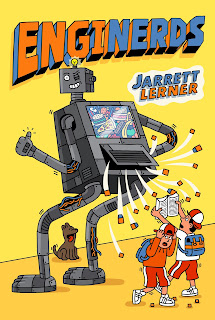 AMS/ER: People say authors write what they know. Why robots?

JL: It’s true that some people say, “Write what you know,” but there are other people who say, “Rules are meant to be broken.” For certain writers, writing what you don’t know is often more fruitful – not to mention more fun! I had no idea what might happen if one day a mysterious box with a robot inside of it showed up on a kid’s doorstep. By writing that story, I found out.

AMS/ER: How do you think of great ideas?

JL: I don’t know where ideas come from – if I did, I’d be there right now, scooping up as many of them as I could! What I do know, however, is that my best ideas always come to me when I’m doing three things:

The first is reading. The best way to get your brain looking for ideas of its own is to expose it to the ideas of others.

The second thing is exploring. I don’t mean you have to go on a trip to a faraway land or have some dangerous adventure. You can explore every second of every day, even if you’re just going to school and eating dinner with your family, simply by being present and observant, keeping aware, and using all of your senses.

The third thing is dreaming, and that’s when you let your ideas and your experiences dance to the unique tune of your own imagination. It’s when you sit around and just let your mind wander and wonder.

Do these three things – read, explore, and dream – and soon enough you’ll have more ideas than you know what to do with.

JL: Like I said, I don’t know exactly where my ideas come from. But when it comes to EngiNerds, I’ve got a guess.

Here are two facts about me: I like to read about robots and I’m always getting packages in the mail. Usually the boxes are full of books or pet food or art supplies. One day, perhaps after reading about robots, I was picking up a box off my porch when I thought, “Hey. What if it wasn’t pet food in here. What if it was a robot?”

Once I’d asked myself that, about a billion more what if? questions popped into my head. I was so curious to find out the answers to them all that I wrote a whole book to do so.

AMS/ER: Were you or are you still an EngiNerd?

JL: An EngiNerd is someone who is curious about the world around them, who is interested in how things work, and who every now and again likes to get their hands dirty and make something. So yes – I’m definitely an EngiNerd!

AMS/ER: Did you want a robot as a kid?

JL: Of course I did! Who wouldn’t want a robot?! I still want one – as long as it doesn’t eat all the food in my house and fart speeding food cubes at me, that is…

JL: Because whether we try to or not, we always leave an imprint of ourselves on what we create. Also, I just thought it was funny – which is the reason I write a lot of the things I write!

AMS/ER: What is your dream food cube?

JL: My dream food cube would contain a couple dozen banoffee pies and a carton or two of cold milk.

AMS/ER: How long did it take you to write ENGINERDS?

Writing a book is long and hard, and most of that time is spent revisiting and revising what you’ve already revisited and revised what feels like a million times. A first draft is just you telling yourself the story you have knocking around in your head. Every draft after that is you getting closer and closer to the perfect way to tell everyone else that story.

AMS/ER: What is your next book?

JL: My next book will be a sequel to EngiNerds. I can’t tell you too much about it, but I can say that in it: Kitty becomes obsessed with a very important sock, a rather curious cloud appears in the sky, and a female EngiNerd who might be even smarter than John Henry Knox himself joins the crew.

Questions our first grade students think all authors should answer:

First Graders: How do you concentrate?

JL: I make sure my stomach is full and my bladder is empty, then I take some deep breaths and try to clear my head. If that doesn’t work, rather than beat myself up about it, I’ll read a little bit or go for a walk, then come back later to whatever it is I was trying to concentrate on before.

First Graders: Why did you become an author?

JL: I became an author because I can’t get enough of stories. I’ve always loved listening to them and reading them and, soon after I learned to read, I discovered I enjoyed telling them, too. Stories can be exciting, entertaining, and enchanting. They can let you see through the eyes of someone whose life you otherwise might not get to know a single thing about. They allow you to experience things – distant lands, made-up lands, moments both painful and triumphant – by simply moving your eyes across a page and using your imagination.

Stories are magic, and I can’t imagine a better way to spend my time than by bringing a little magic into other people’s lives.

First Graders: How did you become an author?

First Graders: How did you get famous?

JL: Me, famous?! I think not. How about “How did you get where you are today?” That I can answer. I did so by (1) exploring and playing around until I found the things I loved doing most, (2) doing those things as much as I could and as passionately as I could, (3) surrounding myself with other positive, creative, supportive people, and (4) never giving up.
Posted by Ann Marie 'n Erin at 11:42 PM