Last year I taught summer school for the first time and was looking for a fun, meaningful, and delicious way to wrap up the last day with my soon to be kindergarteners. I began searching Pinterest for snack ideas because, let’s face it, everything is just more fun with food. After a few minutes of coming up empty handed I saw a picture of a snack mix that included Alpha-Bits cereal and it hit me- An alphabet sort using tasty treats!

I immediately began to think of every snack I’ve ever given my son that had letters on them. I created my shopping list and off I went. After searching through eight different stores I had to give up on the idea of Apha-Bits, but still had a good mix of salty and sweet. Here’s what I included in my snack mix:
Mini Alphabet Pretzels (from Wegmans)
Alphabet Cookies (from The Dollar Tree)
Scrabble Cheez-Its
Mini M&Ms (sorted as the letter M)
Cheerios (sorted as the letter O)

I made charts on 17x11 paper and had students get a few spoonfuls of each ingredient in our snack mix. Then they went back to their seat and sorted. I had a few who needed a bit of extra support, but most were able to match the letters to their mat independently. They had so much fun I’m planning to do this activity again with my first graders at the beginning of the year! 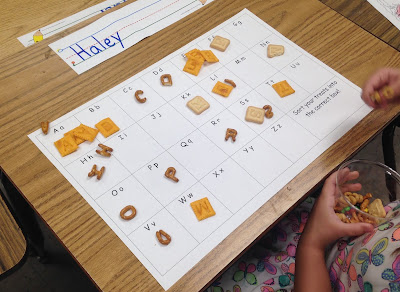 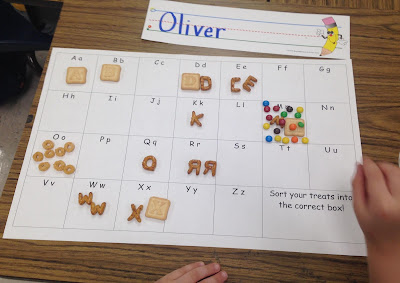 Email ThisBlogThis!Share to TwitterShare to FacebookShare to Pinterest
Labels: Beginning of the Year, Food, Surprise Your Students